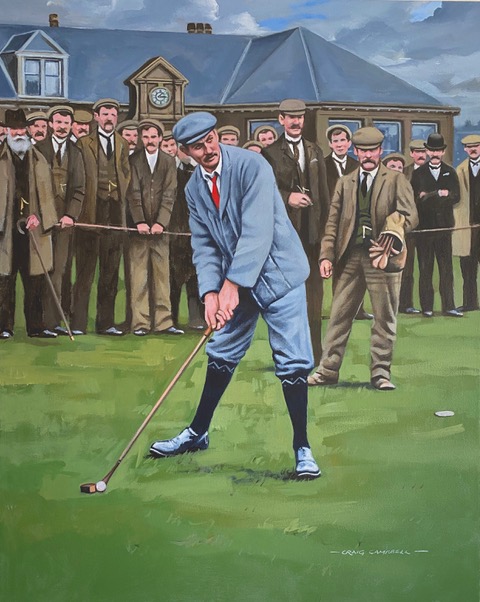 The Worlds best player - Within a few years he became golf's first superstar since the days of Young Tom Morris. In 1896, Vardon won the first of his record six Open Championship(a record that still stands today). Vardon had great rivalries with James Braid and J H Taylor, who each won five Open Championships; together the three formed the 'Great Triumvirate', and dominated worldwide golf from the mid-1890s to the mid-1910s. These rivalries enormously increased the public's interest in golf.

Craig Campbell is one of Scotland's leading portraiture and figurative artists. Finalist in the Scottish Portrait Awards 2017. Craig Campbell was born in Ayrshire , in 1960 . This area of Scotland is abundant with golf courses and playing fields , so it’s not surprising that the majority of his inspiration has come from sport and its personalities.

Craig studied at The Glasgow School of Art and then spent his early years working in London as a Graphic Illustrator for several of the leading agencies. His love for all sports, golf in particular, brought him back to his painting.